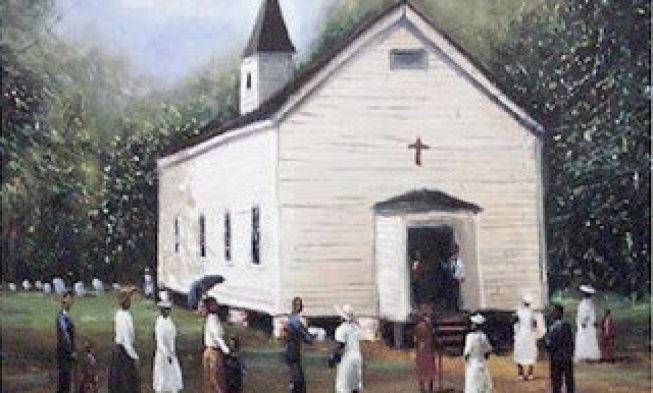 One of the first black preachers in America was John Marrant, who came to Christ during the Great Awakening Revival, after hearing the preaching of Rev. George Whitefield in Charleston, South Carolina in the year 1770.

Being vocal about his new faith, he was rejected by his family. Marrant wandered away and lived in the woods till he was befriended by Cherokee and learned their language. As tensions grew prior to the Revolution, with British inciting Indians, Marrant was arrested by the Cherokee chief and almost executed. Providentially, he preached to the chief, who converted, and gave him complete permission to proclaim the Gospel among the entire tribe.

returned to South Carolina where he preach among slaves. When the Revolutionary War broke out, he was impressed into the British navy and taken to England where he preached for years. He later returned to preach in Nova Scotia, and then Boston.

The missionary-minded Countess of Huntingdon published “A Narrative of the Lord’s Wonderful Dealings with John Marrant, a Black,” which became incredibly popular and went through 17 editions,

Another prominent black preacher was Richard Allen, born to slave parents in Philadelphia and sold with his family to a plantation in Dover, Delaware. As a young man, Richard’s master, Stokley Sturgis, gave him permission to attend Methodist religious meetings, where he learned to read. In the year 1777, at the age of 17, Richard Allen was converted and determined to work even harder to prove that Christianity did not make slaves slothful.

Richard Allen invited a Methodist minister to visit his master and preach to him. Methodists were against slavery, as founder John Wesley had called it “that execrable sum of all villainies.” After Allen’s master heard that on the Day of Judgment slaveholders would be “weighed in the balance and found wanting,” he converted and made arrangements for Richard to become free.

Richard Allen became a licensed exhorter, and in 1783 set out preaching in Delaware, New Jersey, Pennsylvania and Maryland, walking so much that his feet became severely blistered.

Bishop Thomas Coke described Harry Hosier: “I really believe he is one of the best preachers in the world. There is such an amazing power that attends his preaching … and he is one of the humblest creatures I ever saw.”

Born in North Carolina, Harry Hosier was illiterate. Nevertheless, he memorized verbatim entire sermons and long passages of Scripture, resulting in the Methodist bishops letting him preach at their meetings with great effect.

Rev. Henry Boehm wrote (The Wallbuilder Report, 2005): “Harry was so illiterate … that he could not read a word but he could repeat the hymn as if reading it, and quote his text with great accuracy. His voice was musical, his tongue as the pen of a ready writer. He was unboundedly popular, and many would rather hear him than the bishop.”

Hosier’s sermon “The Barren Fig Tree,” preached in 1781, was the first sermon by a black preacher that was copied down and printed. Dr. Benjamin Rush, a signer of the Declaration of Independence, exclaimed that Harry Hosier preached the greatest sermon he had ever heard.

It being too dangerous to preach in the pro-slavery Democrat South, Hosier preached camp meeting revivals along America’s western frontier of that era, the territories of Ohio and Indiana. He was described by historians (The Wallbuilder Report, 2005): “… a renowned camp meeting exhorter, the most widely known black preacher of his time, and arguably the greatest circuit rider of his day.”

Professor William Pierson of Fisk University explained how the term “Hoosier” could have originated as a derogatory label for those attending these rural camp meetings (The Wallbuilder Report, 2005): “Such an etymology would offer Indiana a plausible and worthy first Hoosier – ‘Black Harry’ Hoosier – the greatest preacher of his day, a man who rejected slavery and stood up for morality and the common man.”

The Savannah Baptist Association wrote on the occasion of his death in 1812 (The Wallbuilder Report, 2005): “The Association is sensibly affected by the death of the Rev. Andrew Bryan, a man of color, and pastor of the First Colored Church in Savannah. This son of Africa, after suffering inexpressible persecutions in the cause of his divine Master, was at length permitted to discharge the duties of the ministry among his colored friends in peace and quiet, hundreds of whom, through his instrumentality, were brought to knowledge of the truth ‘as it is in Jesus.’”

Jarena Lee became the first woman to receive “authorization” to preach, with Richard Allen giving his approval. Richard Allen supported AME missionaries, including Rev. Scipio Beanes, who was sent to Haiti in 1827. By the date of Richard Allen’s death, March 26, 1831, the African Methodist Episcopal Church had grown to over 10,000 members, and since then, to over 3 million.

Jarena Lee became the first woman to receive “authorization” to preach, with Richard Allen giving his approval. Richard Allen supported AME missionaries, including Rev. Scipio Beanes, who was sent to Haiti in 1827. By the date of Richard Allen’s death, March 26, 1831, the African Methodist Episcopal Church had grown to over 10,000 members, and since then, to over 3 million.

The motto of the AME Church is: “God Our Father, Christ Our Redeemer, the Holy Spirit Our Comforter, Humankind Our Family.”

Richard Allen wrote in his autobiography: “I was born in the year of our Lord 1760, on February 14th, a slave to Benjamin Chew, of Philadelphia. … My mother and father and four children of us were sold into Delaware State, near Dover, and I was a child and lived with him until I was upwards of twenty years of age, during which time I was awakened and brought to see myself poor, wretched and undone, and without the mercy of God must be lost. … I went with my head bowed down for many days. My sins were a heavy burden. I was tempted to believe there was no mercy for me. I cried to the Lord both night and day. One night I thought hell would be my portion. I cried unto Him who delighteth to hear the prayers of a poor sinner; and all of a sudden my dungeon shook, my chains flew off, and glory to God, I cried. My soul was filled. I cried, enough, for me – the Saviour died.”

Bishop Richard Allen stated: “This land, which we have watered with our tears and our blood, is now our mother country, and we are well satisfied to stay where wisdom abounds and Gospel is free.”